Yesterday’s photo shoot was an invaluable experience. Abstractly, I accepted the notion that photo shoots must be tough work, but yesterday there was nothing abstract about it. I learned firsthand that you need to have Olympic-level stamina and no matter how prepared you think you are, you’re underprepared. Hubby and I were up since 5 am to get the craft service ready (organic fruits, vegetables, and hummus; iced tea, water, and fruit juice), and picked up the model (my lovely cousin) from the airport around 8. 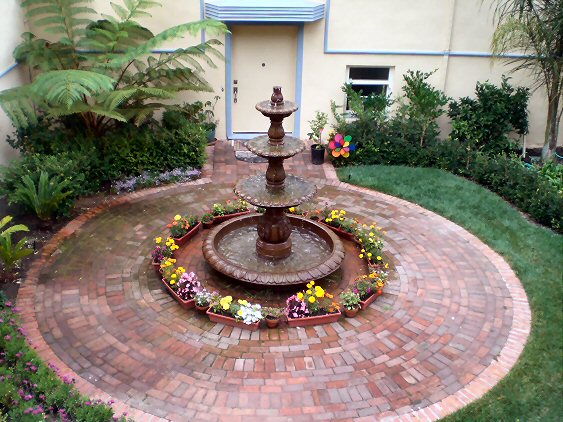 We arrived at the mansion in the hills around 9, the family graciously letting us use the entirety of the home for our shoot, when we realized we needed hairspray (condition: must be volumizing) and eyelash glue. Hubby was assigned the task of hunting down said hairspray and eyelash glue. By himself. In an unfamiliar neighborhood. On his Saturday morning.

Those out there who work 9 to 5 jobs know how precious Saturday mornings are. Those who are straight males can probably empathize with how terrifying it must be to hunt down hairspray (volumizing) and eyelash glue by yourself. A cute moment was when Hubby called from the store. “Okay. There’s like 10 different kinds of hairspray that all say ‘volumizing.’ What do I do now? And it even looks like there are different levels of volumizing. What level does she want?”

While our model got ready and Hubby went hunting for stuff he never even heard of (“Eyelash glue! What is that even for? She’s gluing her eyelashes together? Women do that? Wait… I think I found it. Is it… is eyelash glue the same as ‘eyelash adhesive’?”), the photographer Sherrie of Shaire Productions and I went through the bags once more and reviewed our briefs for each one.

I have to say Sherrie came fully prepared. I was impressed with how well she knew my bags. She knew the names of each, which I admit is a difficult task — half my friends want to know how to pronounce “Peripatetic” — and remembered my inspirations for each design. Sherrie quite possibly knows more about my handbags than my husband.

The morning started with the Precisionist satchel, which we shot on the second story balcony of the master bedroom. What a gorgeous panoramic view of the city we got from that balcony!

Above: Sherrie explaining to Heidi her vision.

For the Precisionist satchel, my concept to the photographer was a “ladies who lunch” scene. We played with the idea of afternoon tea and Sherrie conceived of the above set.

Above: Last minute adjustments by me, the designer herself. =)

I’m still not used to referring to myself as a designer. I kind of feel like a wannabe. Hopefully that will change as Taryn Zhang evolves and I develop more confidence in what I’m doing.

The dress our model Heidi brought? Perfect. Here’s a shot from the photographer: 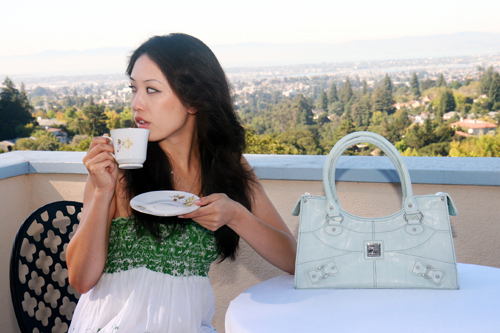 The teacup holding poses weren’t my favorites, but the above was the preview sent to me from Sherrie this morning. The complete file of images for me to play with is forthcoming. I can’t wait to see the rest, especially since we were all in agreement that the “afternoon” tea scene was our favorite (in quotations because it was actually morning).

Anyway, the photographer came up with the dramatic scarf idea. I provided the scarf, which was a black Italian pashmina given to me by my father many years ago. The resident kitty at my home has been using it as a blankie, so it was covered in cat hair. I didn’t have time to clean it, since it was a last minute decision to even bring it, and plus, I didn’t actually think we’d use the pashmina. But we did. And as luck would have it, Heidi is allergic to cats. Poor her! She suffered through this entire shoot! But she was incredibly professional and didn’t complain at all. That’s amazing. I would have probably turned into a queen monster and whined about it, but our model was great, super, super sweet.

These shots do not capture the full depth of Heidi’s beauty, please simply note that. However, I do find the above frame to be a stunning and powerful expression of my idea. The model is in a fierce stance. Her face has the look of a stubborn, independent one. She’s looking back, perhaps at the youth and idealism she is leaving behind; the scarf, symbolic of reality, is wrapped around her neck and pulling her forward. It looks a bit like she’s resisting the pull, but it isn’t so clear which is stronger, the pull or the resistance.

Oh and if someone could teach me how to make the above photo grayscale but keep the full-color red of the handbag, that’d be great! How cool would such a photo look!

Heidi was really suffering from the cat hair all over that pashmina, so as soon as we got the shot, we took it off and finished the set without it. See below. She looks gorgeous! (Well, it’s a behind-the-scenes candid, but still!)

Then we got the opportunity to shoot a really, really cool setup…

So the above behind-the-scenes footage shows that we’re not actually cruising through the countryside…in our, you know, humble little Porsche convertible! Alas, we’re just in a parking lot. Eh well. The official shots will have you thinking otherwise.

Rest assured the above is not the best shot from the Porsche set. It’s just the only one I’ve got presently from the photographer to show as a preview.

This set was about the young professional letting loose on the weekend. She is free and feminine, and knows how to have fun. The Taryn Zhang bag she carries is the subtle hint that there’s a lot more to her than what you see. She is serious about her career Monday through Friday, but for now, she is enjoying the fruits of her labor (represented by the Porsche convertible…hehe, maybe we’re pushing it a bit with the alleged subtexts).

One more shot from the Porsche set, of the model and photographer.

The subsequent sets don’t have official previews from Sherrie yet, but I wanted to show how it looked from our perspective behind the scenes.

These are the informally dubbed “office sets.” I love the above photo. Heidi is carrying the Ambitionist, which you can’t see in the picture but that’s okay. I love the photo anyway.

There’s the Ambitionist briefcase! I’m clashing with my pink turtleneck and red Executive but oh wells. After the Ambitionist, we were prepared to shoot the Executive, which is why I’m carrying it. It was late afternoon and we were rushing through these office sets because Heidi had a plane to catch. She flew in from Los Angeles just for our shoot and had to fly out the same day.

Thus, even though you probably can’t tell from the above pic, we were in a frantic rush-rush-rush mode. As soon as Sherrie assured us she got the shot, the model ran to the changing room and I ran to prepare the next scene. When Heidi came back, I handed her the bag along with a few mumbles about what she should be emoting and we were off. Nothing at all like the morning teacup scene where everybody was still relaxed, at peace, and dapper.

By this hour, everybody was just a little bit grumpy and on edge. It had been a loooong day.

I have to admit I have never seen a lawyer, accountant, doctor, or engineer look like that, but the above shot is going to be a stunning photograph. It’s eye candy that will certainly sell my handbags! =D

Okay the above is an awful pic of me. Hubby even said, “Yech! You’re really going to post that online?!?” But I like how it shows a glimpse of the operation. While Heidi was changing and doing hair and makeup, Sherrie and I were planning out the next set. We had to make a ton of last minute changes. A ton! Even though we spent the last 2 weeks brainstorming back and forth and bouncing concepts off each other, on the day of shooting, there were lighting issues; locations that we thought would be great places to shoot turned out to be not so great; and poses that looked good in our imagination didn’t look so good executed.

Also, I know my weaknesses. I have a tendency to micromanage and be “my way or the highway”-ish. However, Sherrie was the experienced professional in this particular situation, so I had to be really conscious about making sure I deferred to her. Not easy for someone like me. So I’d like to thank Sherrie for putting up with my neuroses. =) I’d also like to thank Heidi because she had to tolerate a designer and crew who couldn’t possibly know less about fashion. Thank you, dear, for all your patience and generosity!

And finally, credit is seriously due to our hero of the day. Hubby woke up and spent his entire Saturday dealing with us. He did whatever was needed to make it all work. By the night’s end, it was evident to everyone involved that my husband is over-and-beyond supportive.

Once I get all the photos in from the photographer, I’ll be posting them on the website, at tarynzhang.com. Wait for it!

Visit us at www.tarynzhang.com.
View all posts by tarynzhang →
This entry was posted in Business Development, Learning Curve, One Step Closer, Progress. Bookmark the permalink.