On or about (anyone out there other than lawyers use the phrase “on or about”?) August 2009, when I first started researching stuff on designing and how to start a line of handbags, I came across Handbag Designer 101. Previously featured Designers of the Day include Rebecca Minkoff, Tylie Malibu, Tulah Ray, Jenny Yuen, and Follis, just to name a few of the folks I admire.

I still recall showing the site to Hubby. “Look how insignificant I am,” I had said. In other words, look how saturated the market is for independent designer handbags.

“And yet how long do you think it’ll take you to get on that site?” he asked.

Since that time, I would visit the site on occasion (by “on occasion” I mean frequently, and by “frequently” I mean all the freaking time in fact I had the site bookmarked) and would click longingly through the links, wondering about the day Taryn Zhang would get featured on HBD101.

Good news: I got featured on Handbag Designer 101! And it took about a year for it to happen, if you’re counting from the day I first resolved to launch my own line, and about a month — that’s right, a month! — from the day I had a batch of satisfactory samples. 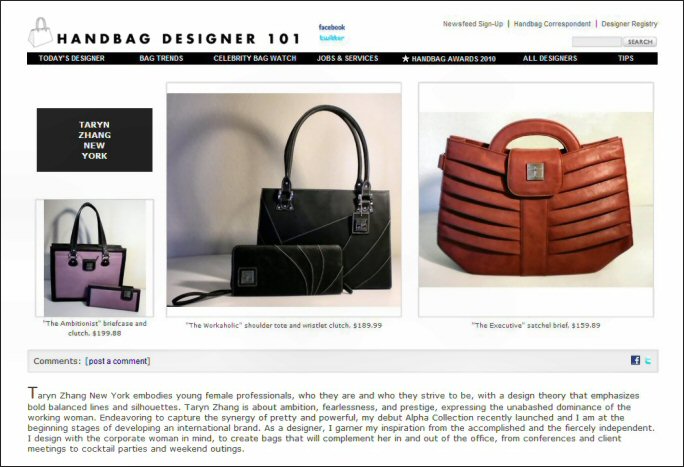 The bad news? Holy snickerdoodle those are some really, really awful product photos! Yes, I submitted them. Yes, I took them. Yes, at the time of submission, I thought they were pretty swell.

What possessed me to submit those photos?

I wanted to crawl into a deep dark hole and rot.

What was I thinking? Oh, I remember what I was thinking. I was thinking yay, I am so happy I got these samples I am going to hurriedly without review take amateur photos of them in my living room with my old digicam and scatter the images across the four wide corners of the world wide web. And that is exactly what I did.

Lesson learned. The hard way. Don’t send stuff out until you’re ready. I can’t believe how awful those photos are. It looks so amateur, because I mean they are amateur. May I have a redo? No, of course I can’t. What’s done is done. I’m pretty sure HBD101 won’t let me switch out the photos for new ones. And I don’t have the chutzpah to ask.

That’s something I’ll be working on now… how to take my own product photos (and the kind that won’t make me cringe when I see it later posted online). I’m thinking for my bags in particular the “lifestyle” photos make more sense than propping them up against a white background. For example, the Workaholic shoulder tote in traditional black, pictured above.

To do: I’m going to try for these kinds of lifestyle product photos instead of the white background ones, which I was failing miserably at anyway.

(Footnote: The two smaller journals at the bottom of that pic are two of my law review publications and the two big books at the top left edge are two of Hubby’s CFA review books. Corporate Finance and Equity, I believe the two books were titled.)

Visit us at www.tarynzhang.com.
View all posts by tarynzhang →
This entry was posted in Business Development, Friends in the Trade, Learning Curve, One Step Closer, Promotional. Bookmark the permalink.