For Business & Leisure: Part I, Business

I’m in Hong Kong at the moment and will be traveling through parts of China. The above photo depicts the start of our factory touring, which turned out to be a memorable adventure.

The factory we’re going with produces handbags for some very prominent, very high-end fashion designers across Europe, big names you and I have heard of, brands that are probably stocked in our closets right now. That’s exciting and assuring to know that Taryn  Zhang bags are in good hands. See below photo: some of the TZ samples are displayed on the table.

I was in handbag heaven! Look at all the gorgeous bags. Most of the bags depicted are from labels that go a little under the radar, labels only the diehard fashionista has heard of, but ones they absolutely swear by. This was handbag heaven! 🙂

The guy below is a samples maker. When a new design spec comes in, he makes the first sample of it. I’m excited about the samples he’s making in the pic. (Not mine, btw. Some other designer’s work, but impressive stuff.) 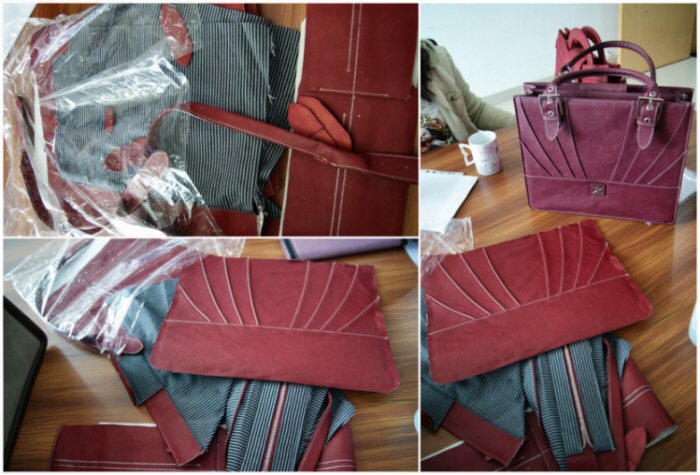 The above are the parts that make up the Catalyst briefcase in bold red. We got the chance to proof the patterns. I had so much fun watching how bags get manufactured in a factory. 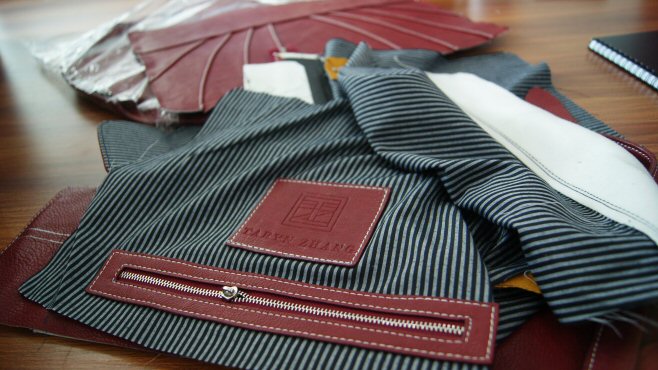 Now below are some exclusive peeks into a handbag factory. Most factories do not let designers or any third parties leave with photographs, FYI, so I felt very blessed and fortunate to get the owner’s consent.

I also had an opportunity to really talk to the owner about his business. Given China’s population, I would never have guessed that finding labor would be a problem, but it is. The number of workers willing to enter this industry is dwindling. Rather, labor has been filling into the electronics manufacturing and service markets (i.e., restaurants, salons, retail, etc.).

China’s rapid industrialization is following in the footsteps of American history. Labor unions are forming, workers are striking, there’s collective bargaining going on, and so the costs of manufacturing are on the rise. For the workers, this all comes as great news, of course. For the factory owners, not so much.

The workers were friendly and patiently entertained all questions. Most of them are around my age, which was interesting and meant there was instant rapport.

They walked me through the whole process, from the rolls of materials that get sourced in to producing molds out of the patterns for each bag style to how the process gets divided up into an assembly line of sorts. Each craftsman oversees one specific part of the process, completes it, then hands the work on to the next craftsman in line. Each one also double-checks the work of the other, creating quite an efficient process if I may say so.

I had to take precaution to not photograph any labels. However, I got to see in person some of my favorite designer bags get made from scratch. That was definitely memorable!

I am so excited about this new collaboration. We were having so many production issues with our previous factory. Finally I had no choice but to make an in-person appearance in Hong Kong, meet with prospective manufacturers, and find a new factory to work with. And I have. This new company is just fantastic.

What’s best of all is that the owner of the factory is a rags to riches story.  He started out as an assembly line worker at a handbags factory where he proactively learned every aspect of the trade. He developed his industry skill set and, with a natural knack for entrepreneurship, launched his own business at the age of 30. 25 years later, he’s the owner of one of the most successful handbags manufacturers in East Asia, with an impressive clientele comprising mostly of higher-end designers and labels.

Since the owner is a rags to riches story, he is a lot more patient about working with emerging designers. The previous factory I dealt with was all about the bottom line: dollar signs. If you were a big client, they treated you well. If you were a small client, they treated you like the dirt that crusts up between the rubber grooves of your boots. And guess what. I was one of their small clients. :*-(

There’s nothing more important to a business than finding the right synergies and partnerships. I established a great rapport with this factory owner, the sales associates and all the workers at the company. The synergies we’re developing are super. Everybody is happy right now and I am pleased to report that the trip to Asia was a success.

Right up to the last minute I was still working. Above are modifications to the Precisionist satchel and the Peripatetic weekender tote made on hotel stationary, sketched and scribbled late the night before a factory meeting. The life of a designer is a ton of fun and this has all been a dream, but make no mistake, it’s tough and it’s how much hard work you’d imagine it would be…times ten.

Part II on leisure and touristing across Hong Kong and Guangdong, China forthcoming!

Visit us at www.tarynzhang.com.
View all posts by tarynzhang →
This entry was posted in Business Development, Design Conception, Friends in the Trade, Learning Curve, Musings, One Step Closer, Personal, Progress, Vacation Pics. Bookmark the permalink.