Hubby took the above photo of me at The Peak in Hong Kong on the night I arrived. The view from there totally reminds me of our Kartika Review (where I serve as managing editor) anthology cover art. See below:

Hubby led the way on all our sightseeing adventures, since he’s literate in Chinese. It wasn’t until after the trip when we started looking through the photos that we realized how many pictures we took of Hubby reading a map. See below for 3 of many. Posting them on this blog only because I think they’re cute!

My cousins from Taiwan met us in Hong Kong and we visited Ngong Ping 360 together. You ride a cable car suspended lord knows how many feet above ground to get to Lantau Island. We took the crystal cabin where the floor of the cabin is made entirely of see-through glass. Not for those with a fear of heights!

Hubby made me climb the dozen or so flights of stairs up to see the Tian Tian Buddha Statue at the Big Buddha Temple. In the above right photo, there’s me about to keel over from exhaustion, and in that pic, I was only halfway up!

I wanted to love the Big Buddha Temple, but I didn’t. There was a commercial twang to every aspect of the temple, nothing sacred, nothing spiritual. We saw monks in Oakley sunglasses playing with their iPhones, a VIP room at the nearby vegetarian restaurant (guilty: that’s where we ate), and you had to pay to do or see anything at the temple.

Perhaps the coolest place we visited this trip was the Window of the World theme park in Shenzhen, People’s Republic of China. The theme park replicates the major tourist attractions around the world, such as the Taj Mahal, Mount Fuji, Buckingham Palace, the pyramids in Egypt, Stonehenge, etc.

Hubby, who has a passion for archery, also kicked butt at the mini archery range in the — guess where! — North America region of the theme park, I guess to represent the U.S. Native Americans. I found it an odd choice for a cultural representation, borderline stereotyping. Guess non-indigenous Americans aren’t the only ones guilty of it (E.g., “Redskins” as a name for a football team…).

Bar none the most fascinating sight at the theme park were the sheer number of high heels we saw.

Keep in mind that all of these photos of high heels were taken at a theme park comparable to Disney World or Six Flags — you know, where even most of us prissy girls are in T-shirts, shorts, and sandals? At one point I sat down and started counting. I got an estimate of 3 out of every 5 girls that walked by to be in high heels. At a theme park!!

When we were at the Peak in Hong Kong and Lantau Island, where we had to climb those flights of stairs to see the Big Buddha, I also saw tons of high heels. Climbing up the temple! Hiking around the island! It’s insanity.

Later friends told me it’s the same throughout East Asia. If you walk the Great Wall of China or visit the Forbidden City, both locations walk-intensive, you’ll again see tons of Chinese women in high heels, often stilettos. Like I said earlier, I was half dead after climbing up those stairs to the Buddha statue, in sneakers. I can’t imagine having trekked the same in pumps.

More photos of high heels, again all taken at the theme park. I planted myself on a bench at one point and just started snapping photos of heels I saw that walked within range over a twenty minute stretch of time.

Now I would like some commentary on this one…

Boyfriends carrying purses for their girlfriends. Yay or Nay? 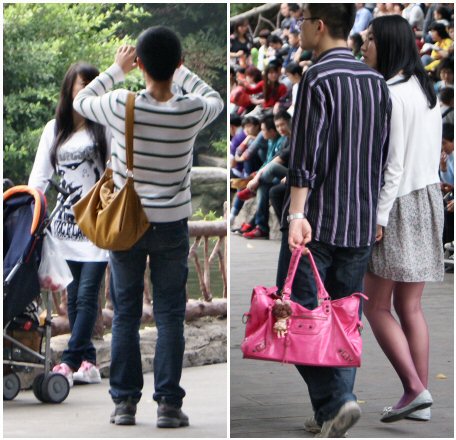 All across Asia, it’s trendy for a guy to carry his girlfriend’s purse. I don’t mean she needs to put on her coat so will he please hold her bag for a moment while she buttons up, no. I mean he simply carries it for her. I wish I had taken more photo samples of the phenomenon because from a Westerner’s cultural perspective, it was quite the sight to see grown men carrying these pink designer bags (e.g., in the above-pictured case, Balenciaga, though that one in the photo looks like a fake…thoughts?) with cutesie shmutesie bibelots dangling off it.

Is carrying a woman’s handbag for her some postmodernist form of chivalry? Or are you with me on this one and it’s just plain silly?

Anyway it’s farewell, Hong Kong and hello again, work. Sigh. Vacation is certainly no pause button on work. Rather, it accumulates while you’re away and on the first day back, you have 386 messages in your inbox flagged as “URGENT” or “TIME SENSITIVE.” I also returned from vacay with the worst of souvenirs: the flu. =(

Visit us at www.tarynzhang.com.
View all posts by tarynzhang →
This entry was posted in Friends in the Trade, Musings, Personal, Unrelated, Vacation Pics. Bookmark the permalink.